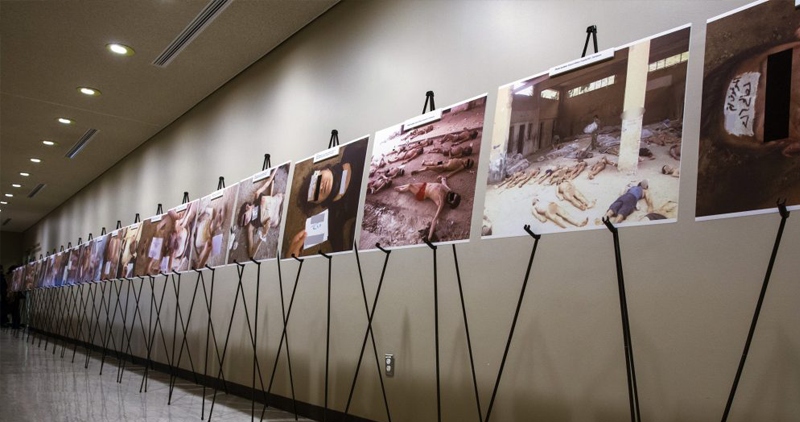 CHICAGO, IL. — In the past few weeks, the families of hundreds of Syrian prisoners have learned that their loved ones died while under the custody of the Government of Syria. The Syria Faith Initiative, a coalition of American faith leaders, decry the lack of transparency and due process among the parties responsible for Syria’s disappearances.

We grieve with these families and pray for the Syrians killed in such a cruel manner, for arbitrary, political reasons that are an affront to international human rights law and universal values on human rights and dignity. We also pray for those still missing in the darkness, facing prison conditions—with  industrial-scale torture and extermination methods— a modern dehumanization campaign reminiscent of the horrors of the Second World War.

There are at least 104,000 detained or forcibly disappeared in Syria, with the majority being held in detention centers controlled by the Syrian government. Between March 2011 and December 2015, an estimated 17,723 Syrians were killed while in detention. There are countless more killed by Syrian security services in field military courts. The Syrian government’s public admission by name of the death of close to 8,000 prisoners, including reportedly 125 children and 65 women, now only confirms the worst fears of observers and victims of the Syrian conflict.

The move is seen by Syrians and observers of the tragic conflict as the Syrian government, now having all but won the war, closing the chapter and forcing Syrians and the international community alike to accept the events of the past eight years wholesale and return to business as usual. The Syrian government, through its Russian ally, is attempting to convince states to forcibly repatriate Syrian refugees. This alone would be a violation of international law; the latest news from Damascus tells the world the Syrians who return, forcibly or voluntarily might not be guaranteed safety and security. We applaud all state leaders who see right through this.

We urge President Trump and his Administration to avoid the normalization of any policies contrary to international human rights law, and to avoid harmonizing U.S. Syria policy with any party to the conflict that refuses to abide by the rule of law and buy in to the Syria peace processes under the auspices of UN Security Council Resolution 2254 (2015).

Below are prayers from our faith leaders:

“In Psalm 113 it states, “How good and how pleasant it is when brothers dwell in unity.” As faith leaders for the United States of America, we pray that G-d give us the strength and wisdom to unite together to confront the evil that has devastated the Syrian community. No child should cower in terror that they will lose their mother, father, sister, brother, or even their own lives for their religious or political beliefs. We are indeed our brothers’ keepers. Our country can indeed be a light to other nations, and if not now, when?” says Rabbi Levi Welton, Executive Director of the Torah Values Network.

“In what must have been a deep anxiety over exactly what cruelties of oppression lay ahead for herself, her people, and the child in her womb, Mary the mother of Jesus, praised her Creator as the God of mercy who “has put down the mighty from their thrones, and exalted those of low degree”; the God who “has filled the hungry with good things, and sent the rich away empty” (Luke 1:52). May this same God who brings low the tyrant and exalts the vulnerable and downtrodden keep in loving embrace the suffering people of Syria. And may we who proclaim our faith in this God of justice and peace do all in our power to be in solidarity with them,” says Dr. Scott Alexander, Professor of Islamic Studies & Christian-Muslim Relations at Catholic Theological Union in Chicago.

“Anas ibn Malik reported: The Messenger of Allah, the Prophet Muhammad, peace and blessings be upon him, said, “Support your brother whether he is an oppressor or is being oppressed.” It was said, “O Messenger of Allah, we help the one being oppressed but how do we help an oppressor?” The Prophet said, “By seizing his hand.” In another narration, the Prophet said, “By restraining him or preventing him from committing injustice, for that is how you support him.” How then can we remain bystanders to the oppression in Syria?” says Salam Al-Marayati, President of the Muslim Public Affairs Council (MPAC).

“Jesus teaches us the greatness or meanness of our civilization is measured not by how we treated those in power, but by how we treated the smallest and weakest in our society: The sick, the hungry and the prisoner. In the Gospel of Matthew, Jesus describes what is closely related to the Day of Judgement also in the Islamic tradition. In chapter 25 he describes “the Son of Man coming in his glory, and all the angels with him” to judge humanity. He welcomes the righteous to the Kingdom of Heaven because “I was hungry and you gave me food…I was sick and you visited me, I was in prison and you came to me.” They ask Jesus, “When did we see you in prison?” Jesus replies, “as you did it to one of the least of these my brothers, you did it to me” (MT 25:40). When the weak and vulnerable Syrian was left by the world to die alone in the dark unjustly in a prison, it was Jesus we let die. When we do not rescue these vulnerable and hungry prisoners we betray our duty as Christians and deny the existence of our common humanity. Our failure to act now, endangers our collective civilization and our Christian heritage,” says Reverend Dr. Conrad Fischer, President of the Institute for Contesting Religious Violence at Union Theological Seminary in New York.