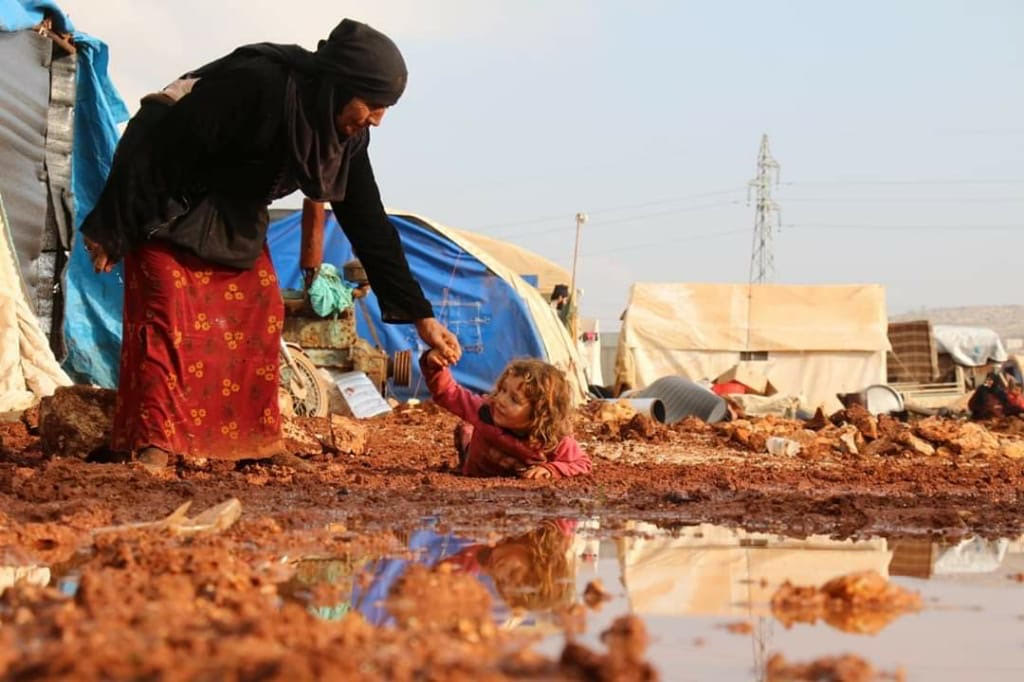 The Syria Faith Initiative calls on world leaders to stop the bombing and bring aid to hundreds of thousands of homeless, hungry, and cold Syrian women and children

(CHICAGO, IL – 1/2/2020) – As the new decade begins, a coalition of faith leaders is urgently calling on world government leaders to take emergency action in response to the catastrophic conditions facing homeless, hungry, and cold Syrian civilians throughout northern Syria – now further exacerbated by the influx of civilians fleeing the bombings of southern Idlib.

In the last two weeks, nearly a quarter of a million people in northwest Syria have been displaced due to the escalation of violence in Idlib province according to the United Nations.

“Tens of thousands of women and children are cramped in rudimentary camps that don’t have the most basic services. They are facing the harsh winter forgotten by the rest of the world,” said Dr. Zaher Sahloul, founder of Syria Faith Initiative and president of MedGlobal, a Chicago-based organization providing emergency medical care in crisis areas around the world. “We call on President Donald Trump to increase the humanitarian assistance to the displaced Syrians and to apply all diplomatic pressure on Russia to stop the bombing in Idlib. The United Nations and its Secretary General Antonio Guterres have been slow in their response to the catastrophic situation. They should make ending this crisis a priority.”

The Very Reverend Conrad Fischer, MD, President-Elect of the American Academy of Religion said: “The Lord our God is watching what we are doing to stop the targeting of civilians for death, disease, and starvation in Syria. If we are listening, God is asking us, as in the Bible, ‘Humanity, where are your brother’s the people of Syria? Their blood cries to me from the ground,’’ Dr. Fischer has been working tirelessly to make sure that the American public understands the gravity of the situation in Syria through art and advocacy. “It is expected that the Secretary-General of the United Nation, Antonio Guterres, will visit the newly displaced Syrians in Idlib because it is the norm in major humanitarian crises. He should make it a priority. We also call on Turkey to allow civilians fleeing from bombing to seek refuge as enshrined in international humanitarian law,” he said.

“Rev. Dr. Martin Luther King spoke about the “collision of immoral power with powerless morality.” We cannot just talk about the Syrian crisis. We cannot just theatrically debate the acts of injustice waged upon innocents. We must ask the question, ‘When will wounded justice rise?’ The UN and every person of conscience, faith, and goodwill must dare to pay the cost to make justice whole. We cannot solve genocide by waiting for governments and politics to find safe ground. We must choose the higher ground of an incarnate opposition to evil because we believe that it is merely right to do right and that the God of the Oppressed will deliver us all.” said Rev. Gregory Seal Livingston from the Coalition for New Chicago.

“Imagine if it was your child, your wife, buried under the rubble of a residential building bombed to cause fear, death, and destruction. What would you do?” asked Rabbi Eric J. Greenberg, director of Public Affairs for Synagogue Connect and a former director at the Multifaith Alliance for Syrian Refugees. “This is what is happening in Syria. Right now. We are horrified by the latest immoral outrage and atrocities against the Syrian people. We appeal to religious leaders and citizens of all faiths and none, to pay attention and donate to provide emergency medicine, food, and shelter to help end this catastrophe – the worst humanitarian disaster since World War II.”

Imam Kareem Irfan, past chairman of the Council of Islamic Organizations of Greater Chicago said: “As people of faith, we are compelled to take serious notice of this human catastrophe and to speak and act in urgent support of the beleaguered Syrian people. We call upon Pastors, Rabbis, and Imams to address this crisis with urgency in their sermons. Churches, synagogues, and mosques should invite informed speakers to educate congregations about the catastrophic humanitarian situation and raise donations to help the Syrian people.”

A December 26 report by the UN’s Office for the Coordination of Humanitarian Affairs (UNOCHA) states that increasing violence and bombings have forced tens of thousands of families to flee their homes to reach safety. “Between 12 and 25 December, more than 235,000 people have been displaced in northwest Syria”- with most of them stuck in a small area on the border with Turkey, which refused to let them in.

Rabbi Levi Welton, Chaplain at United States Air Force said: “We call the Creator our Father in Heaven so that we might treat each other as His children here on Earth. The conflict in Syria is a tragedy affecting our sisters and brothers there and we pray that those with the power to end it, bring it to an immediate end. In the Torah, the values of Noah are championed as a universal code of ethics. These ethics include the commandment to establish courts of justice. Where is the justice for innocent Syrians? Where is the protest for the cruelty done to the children, let alone the innocent creatures, in the region? It is incumbent upon all of us to build proverbial arks of the sanctuary to provide shelter for life. Instead of focusing only on our countries and only on building safety rafts for our own, the Torah expects us to build arks to save the lives of others.”

Salam Al-Marayati, president and co-founder of the Muslim Public Affairs Council, called on churches, synagogues and mosques and all houses of worship to address the humanitarian situation in Syria. “Faith leaders must discharge their responsibility and use their moral voice to make sure that Never Again is not just a mere slogan,” he said.

In the last two weeks, more than 250 civilians, including women and children, have been killed. Since last May, more than 1.2 million Syrians civilians have been displaced and more than 70 hospitals have been bombed, according to Physicians for Human Rights. Idlib has 4 million civilians, and half of them are displaced from other regions in Syria. Idlib has 1,150 refugee camps for the displaced. But Idlib is land-locked and there is no place to flee the bombing and violence except for Turkey, which has sealed its border.

Syria Faith Initiative www.syriafaithinitiative.org is a coalition of diverse faith and civic leaders standing in solidarity with the Syria civilians and refugees and dedicated to ending the atrocities and promoting peace, justice, national reconciliation, and resettlement and return of the refugees.