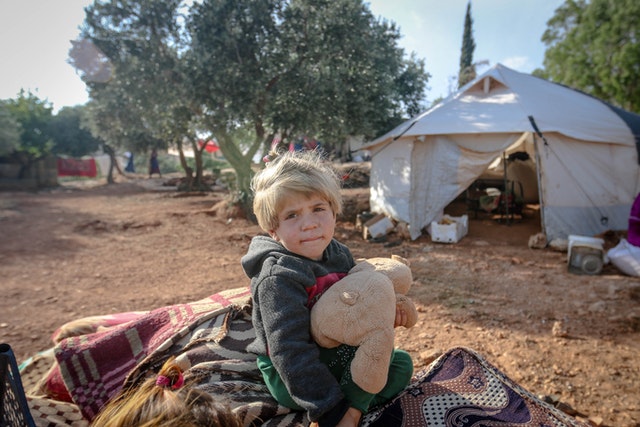 The Syria Faith Initiative joins the world’s religious leaders and joins the Syrian community in standing with Ukraine during Putin’s illegal and immoral invasion. Religious Conscience Demands the Condemnation of This War.

Russia’s unprovoked actions in Ukraine, which have already led to thousands of deaths and millions displaced, are unconscionable and violate the principles of every major faith tradition.

Pope Francis denounced Russia’s invasion saying, “Before the barbarism of killing children and innocent and defenceless citizens, no strategic reasons hold: the only thing to be done is to cease the unacceptable armed aggression before cities are reduced to cemeteries.” The Dalai Lama also spoke out for peace, “Our world has become so interdependent that violent conflict between two countries inevitably impacts the rest of the world. War is out-dated – non-violence is the only way. We need to develop a sense of the oneness of humanity by considering other human beings as brothers and sisters. This is how we will build a more peaceful world.”

The Muslim Council of Britain joined this chorus, by drawing attention to the many Muslims suffering in Ukraine, “We stand with the Ukrainian people, including the hundreds of thousands of Muslim Ukrainians, the majority of whom belong to the Crimean Tatar community: a people who have already faced genocide and persecution under the Soviet Union.” Ukrainian Rabbi Moshe Reuban Asman spoke out, saying, “All those who are indifferent, who agree in silence or not in silence, are partners in crime, in a war crime! A crime against humanity!” At the same time, the World Jewish Congress reports that the global Jewish community has been working tirelessly to advocate for Ukrainian refugees.

Even clergy of the Russian Orthodox Church have spoken out, with one bishop declaring “A huge misfortune has come to the land of Ukraine: blood is shed there and innocent people suffer. An honest person and a God-fearing Christian cannot look impassively at what is happening. The voice of his conscience cries out to Heaven, his prayer is directed to God, to whom the only judgment belongs, and before Whom those who brought sorrow to the people of Ukraine, suffering to mothers, tears to relatives and friends, death and destruction, mass exodus from their country will answer.”

The faith leaders of the Syria Faith Initiative condemn not only the invasion of Ukraine, but we express special concern for the many apparent war crimes committed by Russian forces.

The atrocities we are beginning to see in Ukraine are a grim reminder of the many atrocities and war crimes committed in Syria by Russian forces. To the Syrian community, Russia’s heinous actions in Ukraine are familiar and unsurprising. The Russian military gained extensive experience in Syria and Russia is now beginning to use tactics honed in Syria in Ukraine. Syria Faith Initiative’s president, Dr. Zaher Sahloul documents these tactics, writing,

Breaking the norms of war by targeting civilians is a common theme of Russia’s tactics in Syria, Chechnya and other regions, and so is undermining medical neutrality and the Geneva Conventions. Physicians for Human Rights, a group that tracks attacks on medical workers in Syria, has documented roughly 600 such attacks since 2011, 40% of them since Russia began intervening in September 2015. At least 930 medical workers have been killed, according to the group’s tally.

Russia has committed at least 335 massacres and waged at least 1,083 attacks on “vital civilian facilities,” including 201 attacks on schools, the Syrian Network for Human Rights reported in 2019. In a 2021 report on Russia’s intervention in Syria, the Syrian Observatory for Human Rights said Russia has killed more than 20,940 Syrian civilians from air raids that have used illegal weapons such as cluster munitions and thermobaric vacuum bombs. A busy hospital in the city of Aleppo where three doctors from Chicago volunteered was destroyed by a bunker-buster bomb.

As the situation escalates in Ukraine, we expect that many of these atrocities may be repeated in Ukraine.

Our experiences with Russia’s intervention in Syria compel us to stand up for Ukraine now. Had the international community responded more forcefully to Russia then perhaps the invasion of Ukraine could have been avoided. Unfortunately, President Biden and the international community continue to repeat many of their mistakes with Syria in Ukraine. Continued inaction on Syria, and continued inaction on Ukraine both license and embolden Russia to commit atrocities in both conflicts.

Syria Faith Initiative calls upon world leaders to break the cycle of inaction in Syria and Ukraine.

As faith leaders, we call upon the international community to uphold the principles of international and humanitarian law, rooted in the fundamental dignity of the human person.